Social media channels have fundamentally changed the ways in which people interact with each other, consume news, and seek out health information. Users can harness these platforms to voice solidarity, raise awareness, and even hijack elections. But can metadata be hacked for good? What can public health learn from influencers? How can something like getting the annual flu shot “go viral”?

Between extensive geotags, hashtags, and search functionality, social media platforms lend themselves to a variety of public health research and programmatic work. Hashtags and geotags, which allow users to categorize content they post, are searchable. These often publicly-available pieces of metadata have been used by public health professionals for a variety of purposes including surveillance; characterising neighbourhood features; understanding public sentiment around public health initiatives or campaigns; verifying knowledge of preventive principles; classifying misinformation; and disseminating information in emergencies. Despite the variation in quantity and quality of their use among researchers and practitioners, social media are key in public health work.

The Intersection of Social Media, Equity, and Social Determinants of Health

Individuals use social media in a diverse array of ways that have direct and indirect relationships to individual health, population health, equity, and social determinants of health. Not only are people of all ages using social media for health information, they are also sharing their own health-related experiences. 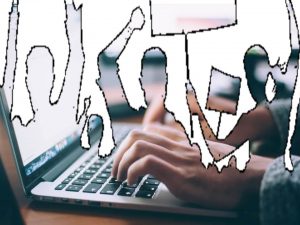 Activism has taken on a new form in the age of social media. Individuals become involved in causes through simply tweeting, or otherwise adding their voice to the conversation digitally. This phenomenon has been termed “slacktivism.” Despite a name that suggests apathy, it should not be discounted, as slacktivism has become an important way in which individuals interact with their networks and the broader social media community. Most recently, millions of women and men around the world shared experiences of sexual harassment and assault using the hashtag #MeToo.

There seems to be contradictory evidence related to whether social media can provide a channel through which to engage “hard-to-reach” groups. While some research suggests social media are under-utilised, powerful tools for engaging these groups in conversations and initiatives that could promote health or address social determinants, other literature points out that a digital divide persists, including less access by location, income or age.

Social media could be essential tools in advancing health equity. Oppressed, marginalised and low socioeconomic status populations can be reached and more importantly empowered via social media. They allow for direct, real-time connection and interaction. Virtual communities within these networks such as Black Twitter create further opportunities for direct, meaningful engagement. This potential isn’t lost on experts, as international publications call for work that goes beyond behaviourist angle when incorporating social media in health promotion. Social media are imperfect in terms of measurement to be sure, but they might prove (almost) as valuable as survey or data analysis software that are staples of public health research and practice.

The questions of how and the extent to which social media can be effectively used to advance health equity remain unclear. More critically, what might it mean for users and social media if public health is able to successfully exploit algorithms, even in the interest of equity?