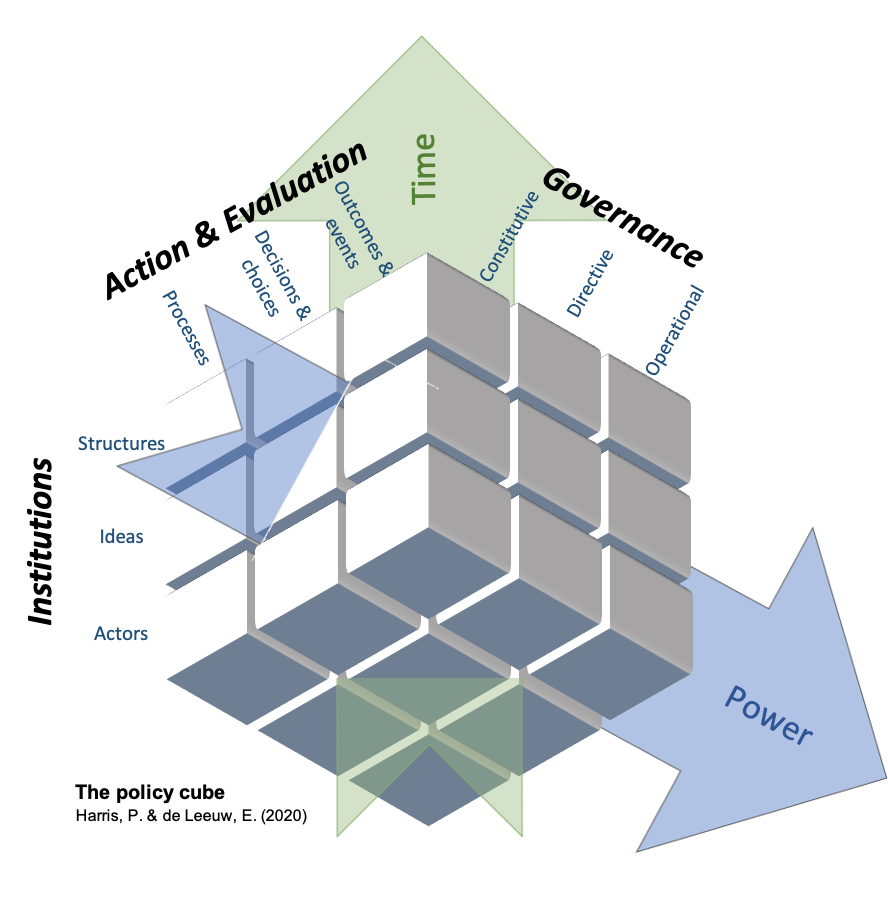 One of the enduring myths among researchers is that policy-making is a black box of unknowable dark arts that is to be avoided at all costs. This myth is particularly pervasive in the field of Public Health. Public Health is a field that thinks it is enough to generate evidence to then give to policy makers to do something about.

At CHETRE, we do not subscribe to this myth. Our core interest is of course equity. We recognise that equity is largely determined by political decisions and policy institutions. And to improve health equity we have recognised that we need to know how the evidence of equity morphs into policy systems and decisions about what (not) to do. We require knowledge about what policy and political processes are.

I (Patrick) have been thinking about what policy is for around a decade now. Over that time I have been systematically breaking down what public policy is, with the aim of better articulating how to then go about influencing public policy to be more equitable. Evelyne has been on a similar journey over the past 20 or so years. Both of us have built our understanding from the discipline of Political Science.

Very recently I was trying to explain what policy is to some colleagues who are undertaking a systematic review of the literature on intersectoral action (for health). At the same time, I was putting the finishing touches to a book on my research, the first part of which is a manifesto for how to research (healthy) public policy. I had also just published a bibliography of ‘healthy public policy’ as well as a glossary of how the concept of power plays out in policy (see sources). During that recent conversation I suddenly had a brainwave that the ‘black box’ of policy is actually a cube. So I went away and, with Evelyne, came up with the ‘Policy Cube’.

Figure 1 shows that the cube is made up of smaller cubes; they are not separate, of course, but this is a way of abstracting complex realities.

Each of the elements of the cube is based in the policy and political science literature, the knowledge about which can be found in the source references at the end of this blog. The essentials are as follows.

The ‘top’ of the cube corresponds to what policy-making is and what it is intending to achieve. Policy is in large part made up of processes (indeed there is a whole body of political science labelled ‘Theories of the Policy Process’). These processes are in place to influence decisions and choices, and their foundations. In turn, these processes, then choices, go on to influence ‘events’ or, what we are most interested in public health research, ‘outcomes’ – such as inequity or disease or so forth.

The left side corresponds to how political scientist break down the sub-systems that influence the processes of policy making. I tend to explain these sub-systems as ‘institutions’, although others, like Evelyne, think sub-systems is a better description. This is mostly a discourse about constructs and metaphors – but the key is that we can distinguish between different sorts of elements that influence, and operate, processes. The elements of these institutions or subsystems are essentially actors (the organisations and individuals involved in policy making), their ideas (largely based on interests and values) and structures (the rules and mandates that flow through systems).

Three other fundamentals of policy-making form the rest of the cube.

First of these is ‘Governance’, in the figure on the right side. The literature on governance is vast and sometimes confusing. A very brief definition goes ‘how we do things around here’.  Essentially it refers to the types and functions of networks of stakeholders involved in policy making. Importantly, especially in current times, these actors include but go beyond government. Government tends to facilitate governance networks to achieve various policy goals. Evelyne has written extensively on Governance for Healthy Public Policy and has helpfully divvied up three essential forms of Governance: constitutive, setting the principles; directive, providing guidance; operational, promoting individual actions.

Power is crucial to policy, and so this is the first of the through arrows in the figure. Power is a tricky and slippery concept, which is sometimes clearly visible but often needs to be explicitly brought out into view in research. Making power visible is actually achieved by clearly articulating the various other dimensions of the cube. But essentially policy is embodied by power.

Time is the final critical factor and is the second through arrow. Policy stays the same or changes (often quite suddenly) over time. Perhaps most importantly for public health researchers, the outcomes we so desperately want to observe from policy making processes and sub-systems often take a very long time to become apparent.

So there you have it! The Policy Cube. Before you go off and think you know it all, we have however a warning. The cube is what we call in academia a ‘heuristic’. It is merely a way of breaking up the black box to articulate the core dimensions of what policy making is. The reality of policy is much more messy and will be different for different policies and different contexts – figure 2! The cube should only be used to draw out core elements of what a particular policy or policy system is made up of.