The Face of the Hospital 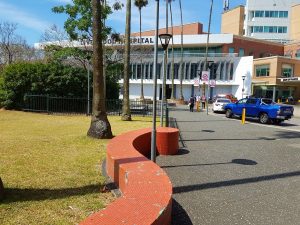 Hospitals are under increasing pressure to deliver best innovative healthcare within tight budgetary constraints. While some attention has been given to improving care through the design of emergency departments, operating theatres, and patient rooms, very little attention has been extended to hospital entrances as the ‘healthy face’ of the facility.

More than positive perceptions of service 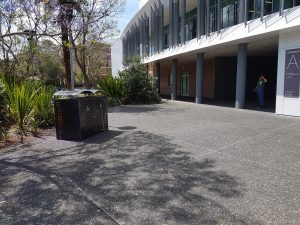 The physical design of the built environment not only can deliver positive results in perceptions of service but also for general human well-being. Well-designed hospital entrances including entry gardens, which are defined as visually pleasing green spaces designed like gardens located near hospital entrances (Yüel, 2013) can improve social capital and reduce stress for patients, visitors and staff. This is indicated by the preliminary findings of our pilot study of the front entrance of Liverpool Hospital, one of the largest hospitals in New South Wales (NSW), Australia. These initial results suggest significant contributing factors include poor signage, lack of seating and shade, amount and closeness to vehicle traffic as well as an inadequate amount of green space.

Not new, but a slow resurgence 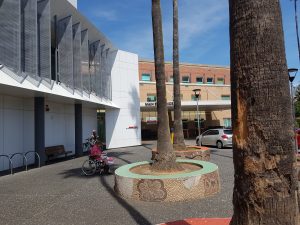 While the belief that plants and gardens are beneficial for patients in healthcare environments is not new (in some cases more than a thousand years old) and appears prominently both in Asian and Western culture, this notion became less prevalent from the 1900s as hospital administrators and architects looked at traditional architecture, buildings primarily, as the first and foremost line of defence in reducing the risk of infection and serve as functionally efficient settings for new medical technology (Ulrich, 2002). However, in recent years, there has been a resurgence in the idea of having gardens in healthcare settings. This is primarily being driven by the increasing need to create functionally efficient and hygienic environments that also have pleasant, stress-reducing characteristics (Ulrich, 2002). 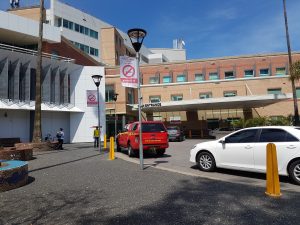 The preliminary findings of the CHETRE literature review and pilot study of the front entrance of Liverpool Hospital, NSW, Australia, show hospital entrances are so much more than mere gateways to health services. Apart from improving perceptions of service, it can contribute to the general well-being of patients, visitors, and staff. Hence, the design of hospitals’ entrances should be considered just as important as other parts of the built environment. However, more research is needed in this area to measure and illustrate this accurately. This is by no means a new concept, but thankfully there has been a slow and steady re-awakening of this idea, in recent years, in the pursuit of building and maintaining functionally efficient and hygienic hospital environments with welcoming and stress-reducing characteristics.