Disruptions are not necessarily cataclysmic events located sharply in time. They reach tipping points. In 1956 M. King Hubbert theorised a phenomenon called ‘peak oil’ (1): the moment maximum extraction of crude oil was reached, and from that moment it would go down-hill with the world. ‘Peak oil’ would cast its doom on Planet Earth some time between 1960 and 2050 (with the majority of predictions somewhere next year).

The rise and fall of geo-extraction based internal combustion machines fuelling industrialisation is a (admittedly disruptive) blip on the glacial time scale of geological epochs. It is unsettling, therefore, that we humans are the first species in the existence of the planet to be aware of the fact that we are witnessing a shift in epochs – and are entering into one of our own making. 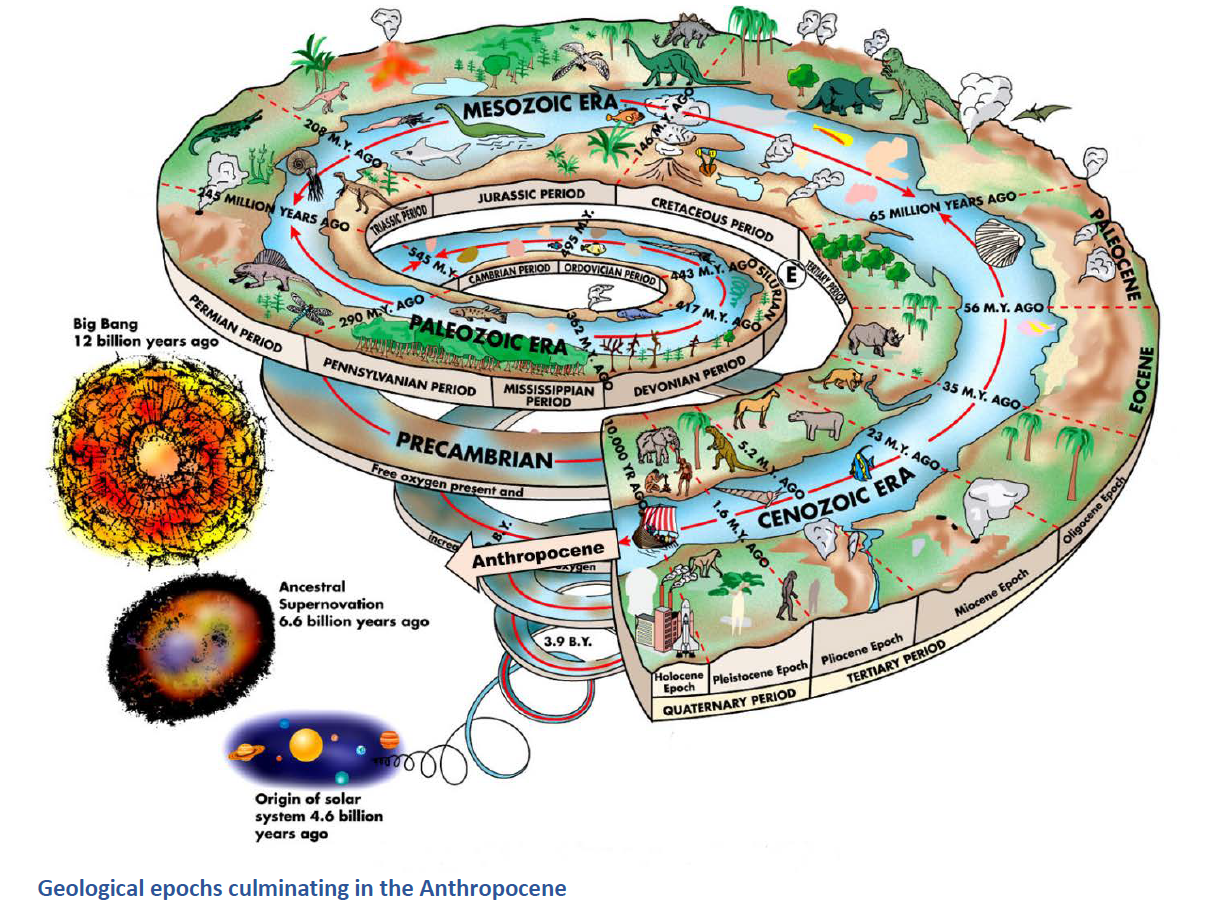 This is the Anthropocene – where humans have started to make a permanent impact, indelible and observable for the remaining existence of the solar system on the strata of sedimentation of Earth. The Anthropocene is the ultimate disruptor of the Earth’s systems. Geologists have debated where in time the starting point of this human caused sedimentation can be placed. The first detonation of thermo-nuclear devices in the 1940s has been proposed (leaving a thin layer of radioactive matter on the Earth’s crust), others are more ‘conservative’ and observe permanent residue of (micro)plastics in seabeds and mountain ranges as the first evidence of an Anthropocene.

I see human settlement as the phenomenon contributing most to the Anthropocene. After a slow start for about 10000 years urbanisation has picked up pace in the mid-1800s, and Earth has been famously declared an urban planet in an urban century by the United Nations soon after the turn of this millennium (2). More than half of the world’s population now lives in cities, and depending on the method of counting this may yet have reached 70%.

We have reached ‘Peak Urban’ – there is no way back. The urban environment is our future habitat and it is shaping peoples’ health potential and threats. It has suddenly become the permanent disruptor. Romantic notions of natural living surrounded by pristine environments and autarkic subsistence must now be relegated to the Holocene. The environments of our entire lives, whether we like it or not, will be constructed by human structure and human agency. No matter whether they are red (built), grey (institutions), green (natural/terrestrial) or blue (natural/aquatic) environments, our surrounds are anthropocenic and -genic.

It is therefore dramatic that we get these environments so often wrong. Wrong for human interaction and growth, wrong for health and wellbeing, wrong for social and ecological sustainability, wrong at virtually any level. If we create our own urban environment, why don’t we make better efforts at getting it all right?

At its simplest, cities have dual purpose: they concentrate things, and they move things. If one of these functions is not hitting the mark, the other will suffer. Cities thus entering into decay have a hard time emerging into health and prosperity again – let alone into sustainability. Scaled up to global connectivity and ‘peak urban’, some cities do have the value and governance systems to concentrate nimbly, whereas others find themselves isolated and on the fringe of viability – but regressing from city-hood is not an option; they simply decline into urban deserts or withdraw from the equitable provision of services, infrastructure and facilities, turning suburbia into Peak Slum and disconnected and mobility-challenged hotbeds of non-communicable disease, disability and unequal opportunity.

The growth of the local, of urbanity, has not kept pace with the global governance systems that have emerged over the last two centuries or so – those of nation-states declaring sovereignty (3). The Anthropocene created an insurmountable governance disconnect between what matters locally and what happens globally – and the other way around. City-dwellers and their representatives feel increasingly disconnected from the global discourse that drives the creation of health, sustainability and prosperity. They will be the have-nots of the Anthropocene. Millennials are filling this space in glocal connectedness through social media and the gig economy but may not contribute to traditional social and community development, leaving urban administrations that cannot keep pace with these new forms of concentration and mobility yet again left to their own – haphazard – devices. New inequities will emerge between the connected and the disconnected.

Is the glocal disconnect view of Peak Urban in this Anthropocene painting too much of a bleak picture? The future of the urban planet and this urban century surely must look better – especially for the health governance opportunities that are created by concentrations of technology and media?

Yes. There is light. Groups of communities and local governments have explicitly chosen to seek a governance role on the global podium. They have connected around values such as health (Healthy Cities), technology (Smart Cities) and other themes (Resilient Cities, Slow Cities, Age-Friendly Cities, Safe Cities). They have joined, facilitated by Habitat III in Quito, in globe-spanning networks like Sustainable Cities, United Cities and ICLEI, and have explicitly embraced multi-professionalism, the value of connected research and development, the power of committed communities and diversity, and open and transparent exchange of experience. Perhaps one of the most compelling characteristics of these glocal networks (4) is that, different from the second half of the 20th century, there is no distinction between the Global North and the Global South anymore. The urbanist Saskia Sassen (5) a few decades ago described a class of ‘Global Cities’ in which it makes no difference whether you are in Copenhagen, Seoul, Kinshasa, Sao Paolo or Chicago to navigate public transport or the food system – it appears that connected glocal cities of the 21st century, indeed of the Anthropocene, are all world cities.

Networked, distributed glocal urban (health) governance is the only way beyond Peak Urban.